With the final major of the 2015 season in the books, players are now beginning to gear up for the Fed Ex Cup Playoffs and the $67 million purse that comes with it. Starting with a 125 man field at the Barclays and winding down to a 30 man field 3 weeks later at the Tour Championship, there is much more excitement in store for the remainder of the season. While the Fed Ex Cup Playoffs add an entirely new and successful dimension to the PGA Tour, I see the conclusion of the PGA Championship as the best time to reflect on the season as a whole.

1. The Rise of Jordan Spieth – Jordan Spieth’s wild success this year was not unpresidented, it was just faster than anyone thought imaginable. The 22 year old not only won the first 2 majors of the season, but also placed in the top 4 in the second 2 majors of the year. With these remarkable major performances, Spieth was able to break Tiger’s cumulative major record of 53 under par in 2000 by one stroke this year. Adding on to Spieth’s ascent to number 1 in the Official World Golf Rankings is his remarkable consistency. In his 21 starts this season, Spieth has finished in the top 3 nine times this season – meaning that every time Spieth is entered into a tournament there is over a 40% chance that he places at or near the top. Jordan Spieth is doing wonders for the game of golf, and is in line to get huge endorsement deals in the next year.

2. A Battle for Number 1: While Jordan Spieth stole the show from Rory McIlroy this year, the battle for the number 1 spot in the Official World Golf Rankings is far from over. McIlroy had a stellar showing towards the middle of the season with wins at the WGC Cadillac Championship and the Wells Fargo Championship. But was sidelined for the heart of the season because of an ankle injury. However, in McIlroy’s first appearance since the injury, he quietly had a very solid 17th place finish this week at the PGA Championship. I think it is safe to say that this rivalry has a great future ahead of it.

3. The Sunday gene (or the lack there of): Step aside Rory McIlroy and Jordan Spieth, cause Dustin Johnson has arrived. Or not. Dustin Johnson is the best player in the world, when it comes to the first 3 rounds of a golf tournament. After that, however, it is almost always downhill. In this year alone, Dustin Johnson has been atop the leaderboard following the first round of the PGA Championship, U.S Open, and British Open. This is a remarkable feat, but in order to win at the majors you need to have four solid rounds as opposed to two great ones and two bad ones. Without this consistency it is impossible to win the big tournaments. I sincerely hope to see Johnson come away with a major, but with his streak it is looking like he’s becoming the Phil Mickelson of U.S. Opens.

4. The future of golf is looking bright: Aside from 26 year old Rory McIlroy and 22 year old Jordan Spieth, there was a lot of young talent on tour this season. This list, of course, has to start with the 23 year old Japanese golfer Hideki Matsuyama. In his third year on tour, Matsuyama finished in the top 25 fifteen times in a mear 20 starts, including a fifth place finish at the Masters this year. Matsuyama has all of the talent in the world, the only question is when he will break through with his first major victory. Another guy who had a fantastic year was 25 year old Brooks Koepka. In only his second year on tour, Koepka has risen to number 17 in the world because of his remarkable consistency and victory at the Waste Management Phoenix Open earlier this season. A final guy who had a remarkable year was PGA tour rookie and long hitter Tony Finau. He came flying on tour this year finishing in the top 25 in 15 of 28 starts this year. With a year under his belt, Finau now has the experience and the course knowledge to start winning on tour.

5. Out with the old and in with the new: 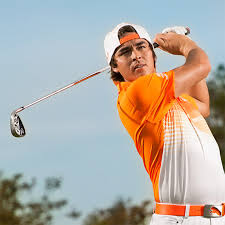 More so than any other year, 2015 seems to be have put a huge spotlight on the newest generation of PGA Tour pros. While Tiger Woods and Phil Mickelson are still high in popularity, guys like Steve Stricker, Graeme McDowell and Luke Donald simply don’t have the wow factor that they used to. Instead of wearing Tiger’s signature Sunday red, kids now embrace the loud and colorful Puma flat brim hats and clothing that Rickie Fowler has made so popular. This is a new generation, that is not only marketable because of their success on the course, but also off the course. It is this newfound style that will save the game of golf for generations to come.