There’s no denying that Giannis Antetokounmpo is officially a superstar. He’s second in the NBA in scoring, 10th in rebounding and just received more All-Star votes than Kevin Durant and Stephen Curry. Even casual basketball fans finally recognize his greatness.

And yet, no matter how much Giannis continues to progress, there’s always been one flaw he hasn’t been able to Euro-step around: his jump shot. Or rather, lack thereof. “Yeah, Giannis is great but he can’t shoot. Wall off the lane and he’s a different player.” This narrative has been the only cloud hanging over Giannis’ game since he’s become a true two-way star. Bill Simmons mentioned it on the Lowe Post Podcast in the past month. Colin Cowherd, who draws a considerable audience for his radio show, recently said, “He (LeBron) can actually shoot. Giannis can’t shoot.” No matter where you look, this seems to be the only correct take about Giannis’ jump shot and how it’s the only obstacle from taking his game to another level.

But are we sure he can’t shoot? Isn’t it possible that his shot has improved over the last five seasons?

Let’s try an exercise. Forget everything you know about Giannis. You’ve never seen him play before, and you’ve never heard Colin Cowherd or someone else rant about how bad he is at shooting. This is the first time you’ve ever seen him shoot.

You can even just watch the first 25 seconds. If that was all you’d ever seen, would you still think Giannis can’t shoot a lick? That he doesn’t have a jump shot? I highly doubt it.

It’s gotten to the point where the ‘Giannis can’t shoot’ narrative has far surpassed reality.

Let’s take a step back. Awful shooting puns aside, it’s important to remember where Giannis is coming from. Growing up, he didn’t play basketball. He didn’t grow up watching MJ and Larry Bird highlights like most NBA legends. From what we know, Giannis has only been playing and watching basketball for about 10 or 11 years, since he was about 12. Just about every other professional basketball player – heck even you and me – has probably been shooting hoops since they were four or five. He is constantly learning the nuances of the game. Improving his post work, how to find his teammates in rhythm, where his spots are on the floor, shooting without hesitation – we’ve literally watched Giannis learn how to do these things. It’s easy to take for granted how far he’s come, but he could do little more than dunk and pass as a rookie.

It makes sense, then, that Giannis wouldn’t be a naturally good shooter. Not only has he only been shooting for a little over a decade, but he’s also been growing practically the entire time. He entered the league 6’9” and around 200 pounds. He’s now closer to 6’11” and 240. He’s essentially had to retrain his mechanics as his body has continued to progress. It’s why he always had that hideous hitch in his form, from when he bent his knees and went up into his release. He didn’t even trust his body or know where his proper release point was. And he’s really only been shooting in his “new” body for two years at the most.

On top of that, former Bucks head coach Jason Kidd may have stunted Giannis’ shooting growth from behind the three-point line. Giannis only attempted 44 total threes in his sophomore season (0.5 per game), and we’ve since learned this was due to Kidd banning Giannis from shooting threes.

This is where it’s important to acknowledge the supposedly black and white ‘Giannis can’t shoot’ narrative actually has a Giannis-sized gray area. Either he can shoot or he can’t is a lazy dichotomy. It’s tracking his progress as a shooter that we should really be focused on. Magic Johnson and LeBron have shown us you don’t need to be an elite shooter to be an all-time great. Heck, even Michael Jordan was a below-average three-point shooter for most of his career. Does that ever great brought up when discussing any of those three legends?

Giannis doesn’t have to be an elite jump shooter to be great, we know that already. Because he’s already great. This is where the truth diverges from the narrative. Giannis simply has to improve to an average shooter and everything changes. He’ll never be an elite shooter; it’s impossible to become one overnight and even tougher when you’re seven feet tall. But if Giannis becomes a respectable shooter, one who can hit enough open threes and can some jumpers off the dribble, then it opens up the rest of his lethal offensive arsenal that much more. The threat of a decent jump shot means defenders need to be a half step closer to Giannis on the perimeter. That half step is all he needs to blow right past or spin around them. A better shot means more bites on pump fakes, which yields more trips to the free throw line. A better shot means defenders can’t duck under picks against him, which will open up more passing lanes and driving opportunities.

Giannis has progressed as a shooter before our very eyes and yet the narrative hasn’t budged an inch. Let’s look at the numbers.

One number scouts often look at for young players with shooting issues is free throw percentage. Though a free throw is obviously easier than a jump shot because it’s always open and the shooter’s feet are always set, it’s a solid measure of a player’s shooting form and subsequent potential. If you can shoot free throws with consistent, solid mechanics, then eventually it should be able to translate to a jump shot. It’s why guys like Steph Curry and Kevin Durant are almost automatic from the line.

Arguably the biggest leap Giannis has made this year is his mid-range shooting, specifically on post fadeaways. It’s shockingly never brought up by people like Colin Cowherd, but it’s becoming a real weapon in Giannis’ arsenal. He uses it when players are anticipating him attacking the basket, and his height/length combination make it practically unguardable.

Look how natural that is. Giannis has Justin Holiday on him, a much smaller defender. He knows he can turn and fade and get a super clean look at the basket. This isn’t merely a last resort option for him now; it’s a weapon. It’s sneakily one of the reasons he’s vaulted himself into the second-highest scoring slot in the league.

Here, he does it again, but from the elbow as opposed to the baseline. Different spot, same result. From the post, Giannis is able to take advantage of his long frame and since he doesn’t have room to bend his knees, there’s less of a hitch in his shot. He’s been doing this all season long and it’s made him that much tougher to defend. It might not always look pretty, but a lot of these occur 10-12 feet from the hoop. They’re most certainly jump shots.This is Giannis’ first year unleashing it and it’s already pretty potent. In a few years, it has the potential to be an unguardable go-to weapon for him.

Giannis has flashed the ability to shoot off the dribble as well.

Here, Giannis sizes up big man Quincy Acy. Acy has to give him space so that he doesn’t get beat off the dribble. Giannis tests the waters with a few dribbles, then confidently rises for a shot when he sees he has the room he needs. And one.

This is important because Giannis is rarely afforded an open mid-range jumper. These are almost always contested off-the-dribble shots while having the other team’s best defender in his face. So while his percentages will likely only approach average, if he makes this shot consistently enough it gives defenders one more scoring outlet they have to defend. And when defenders are content to let him shoot, Giannis is increasingly showing the ability to make them regret it. 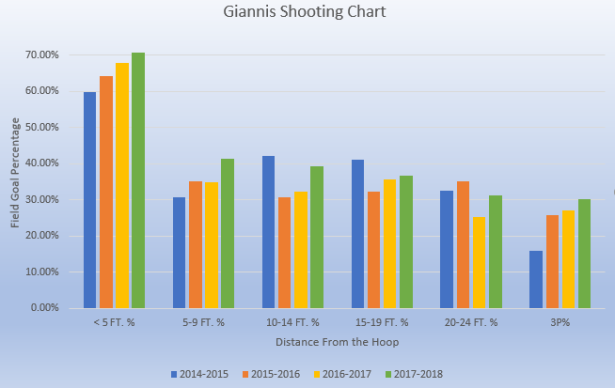 While improving efficiency is impressive and a sure sign of progress, what this first chart doesn’t capture is how Giannis is doing this with increased volume as well. The blue lines from Giannis’ sophomore season might make it look like he hasn’t progressed at every spot. But when you look at how many more attempts per game Giannis is taking from each spot on the court, it’s easy to see how much he’s improved.

I find it hard to believe someone who ‘can’t shoot’ has enhanced efficiency with increased volume in three straight seasons.

As you can see in the chart above, Giannis’ three-point percentage has also climbed slowly but surely, despite Kidd banishing him from beyond the arc and stunting his progression as a second-year pro. When he doesn’t hesitate, he looks comfortable and confident from three.

That’s a pure looking jumper right there. It’s an incredibly small sample size, but Giannis is shooting 50% from three in the four games since Kidd has been fired. It seems like he and the rest of the team are playing looser and thinking less about shot selection. When Giannis doesn’t think about it and just lets it fly, good things tend to happen.

Giannis hasn’t played a single minute with Jabari Parker this season. Parker, Khris Middleton, Eric Bledsoe and Giannis are yet to share the floor as Milwaukee Bucks. That’s all scheduled to change when Jabari makes his season debut on Friday. The presence of Jabari and the lack of Jason Kidd on the sidelines should open up more uncontested three-point opportunities for Giannis to shoot in rhythm, which should help his development even further.

When Jason Kidd was fired, a lot of national media members were confused and appalled the Bucks had the guts to fire a future Hall of Famer in the middle of the season. But real Bucks fans knew just how bad it had gotten and how right GM Jon Horst was to make the move. This just shows you how few Bucks games the national media actually watches, and the vast divergence in local and national perspectives.

Heck, most SportsCenter anchors and national broadcasters still pronounce Giannis’ last name wrong. An-Teh-Toe-Koonm-Poe. It’s not even that hard! So don’t expect the narrative to change anytime soon, regardless of Giannis’ progress as a shooter.

The truth is, Giannis is an ok jump shooter. He’ll never be elite, and it’s certainly possible he’ll only be above-average at the free throw line. But ok is certainly a lot better than “can’t shoot.” He can clearly shoot! That post fadeaway has potential to be a truly dangerous weapon. And it’s within the realm of possibility that Kidd truly stunted his growth as a shooter. At the very least, he seems more relaxed with interim head coach Joe Prunty at the helm.

Giannis went 3/3 on three-point attempts tonight. Here's what he had to say about shooting from long range going forward: pic.twitter.com/uVkwTgRqy1

Again, he’s just 23 and has only been honing his shot for a decade. We already know he has a sterling work ethic. Giannis’ development is both qualified in his improved mechanics and quantified in his upgraded shooting percentages from nearly every spot on the floor. His shot will never be his strength, but tangible progress has him on track for a respectable jump shot.

After all, what’s the most famous play of his career? A step-back jumper.

Statistics courtesy of basketball-reference.com and nba.com.