It’s been a long spring and summer, but thankfully the 2015 NFL season is almost here. But now that I think about it, it’s always football season. This offseason was full of headlines ranging from deflategate and Tom Brady to the countless roster cuts and trades. So, with kickoff this Thursday here are my preseason predictions and analysis for the NFC North. 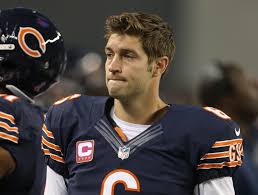 The 2014-15 NFL season was a complete disaster for the Bears organization. The Marc Trestman-Jay Cutler experiment was a major failure, and as a result, there were some big changes made in the Windy City this offseason.  To start off, there was a total overhaul of the front office and coaching staff.  Most notably, 37-year old Ryan Pace was hired to take over the General Manager position from Phil Emery after a rough three-year tenure. Pace will look to build on his successful experience with the New Orleans Saints and lead the Bears into a new era. With his first move as GM of the Bears, Pace fired Marc Trestman and a majority of his coaching staff clearing the way for veteran head coach John Fox to step in. Along with Fox, Vic Fangio was brought in to take over the defense from San Francisco, and Adam Gase reunites with Fox from Denver to serve as the offensive coordinator.

While the front office and coaching staff saw a majority of the change, there was also change in the player personel. Starting off the year, controversial wide receiver Brandon Marshall (and a 7th round pick) was traded to the New York Jets in exchange for a 5th round draft pick. This was a huge blow to an already struggling offense, but it may be worth it, seeing as he was constantly causing trouble in the locker room. Bears fans will have to hope that Alshon Jeffery and first round selection Kevin White will be able to step in to fill Marshall’s enormous role. On the opposite side of the ball, the Bears lost a huge part of their core personel with DT Stephen Paea, LB Lance Briggs, and CBs Charles Tillman and Tim Jennings all no longer a part of the Bears’ organization. Taking over those roles will be very difficult, but look for newly signed LB Pernell McPhee and second year corner back Kyle Fuller to step up this season.

The Lions had a solid 2014-15 campaign. They finished with eleven wins, made the playoffs as a wild card team, and finally lived up to expectations. As a result, their offseason was not nearly as busy as it was the past couple of seasons. The Lions are finally out of the rebuilding phase and are now looking to win a Super Bowl. Lead by sixth year QB Matthew Stafford and All-Pro WR Calvin Johnson, this could, in fact, be the Lions year. The one thing that could hold the Lions back is the loss of DT Ndamukong Suh. The second overall pick has been the rock of the defense the past four years, and is almost irreplaceable. The consolation prize for not meeting Suh’s large contract demands was the acquisition of Haloti Ngata from the Baltimore Ravens for a fourth rounder and a fifth rounder. So, financially the Lions made the correct decision, but their Super Bowl hopes are looking a little grimmer with the loss of Suh.

Even with Suh’s departure for Miami, the defense will still need to be the strength of the team. Offensively, the Lions are one dimensional. They can pass the ball better than any other team, but Joique Bell and Ameer Abdullah will need to bring something more to the rushing attack.

Outside of re-signing key past contributors Randall Cobb, Bryan Bulaga, and B.J. Raji this offseason, the reigning NFC North champions had a very quiet winter. They lost cornerbacks Tramon Williams and Devin House, along with linebacker A.J. Hawk, but thanks to a strong depth chart, they should all be fairly easily replaced from within the organization. The most notable offseason moves by the Packers were made during a very solid 2015 draft. In the first round the Packers drafted defensive back Damarious Randall. With his speed and athleticism, he is sure to be an immediate impact player who will serve as a more than adequate replacement for Tramon Williams. On the opposite side of the ball, the Packers have question marks at tight end and injuries on the offensive line, but they still have good old #12 under center.

The biggest blow to the Packers chances of a “fivepeat” in the NFC North was the loss of pro bowl wide receiver Jordy Nelson during the preseason. Nelson is one of the most reliable wide outs in the league, and with out him to play opposite Randall Cobb, they are going to need Devonte Adams to step up, and running back Eddy Lacy to have a career season. The recent signing of former Packer wide out James Jones should give a little bit more confidence to fans, but Jordy Nelson is a tough guy to replace.

Under the guidance of rookie head coach Mike Zimmer, the Minnesota Vikings finished the 2014-15 NFL season with a 7-9 record. Yes 7-9 is a losing record, but no this is not a bad sign. Why? Two reasons: they were without 2012 NFL MVP Adrian Peterson for the entire season and they were being led by a rookie quarterback in Teddy Bridgewater who looks to be the Vikings’ starter for years to come. So with a limitless quarterback and a dominant running back, it is safe to say the Vikings are headed in the right direction.

Adding on to the Viking’s promise for a solid future is a great draft class and many offseason transactions. In the draft, they addressed their horrific pass defense by selecting CB Trae Waynes out of Michigan State in the first round. He will fit perfectly in the system and has a lot of potential to do great things under a defense minded Mike Zimmer. Further helping the defense will be rookie linebacker Eric Kendricks. Scouts have said that he has great instincts and could be just as successful as his brother Mychal, who is on the Eagles. Kendricks joins his former teammate Anthony Barr at the linebacker position, so there is definitely some chemistry there. Aside from the draft, the Vikings addressed their receiving issues by trading for Mike Wallace. Overall, this is a very hit or miss trade, but it certainly provides Teddy Bridgewater with a threat downfield.